The best recovery advice I've been given?  Simple.

You CAN do this.  Take one bite at a time.

It sounds trite and condescending.  But it isn't.  Because unless I eat, my brain will never be able to be coherent enough to process the other side of ed, the mental side.  I need to nourish my body so that I can work on recovering my mind. 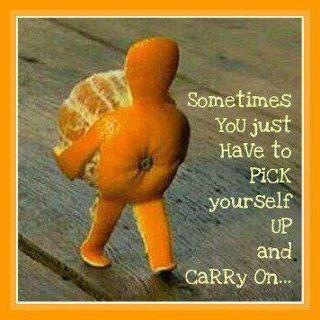 How am I able to do that?

More helpful words from my team, who have been my constant cheerleaders and guides on this journey...

Acceptance is the hardest part.  When you do- then you know who and what you are fighting. (8/3/11)

The emotions are there because you need to move forward dealing with them instead of using ED to handle things.  You have the skills, ability intelligence and drive to win this battle.  Don't quit. (11/1/11)

Merriam-Webster defines community as a unified body of individuals.  If you would have asked me a month ago which unified body of individuals I belong to, I would have given you the standard answers - the city in which I live and the school and district in which I work.  The only two real life communities I feel connected to.  I am a part of three online communities that have been very supportive, as well.  But that's it. 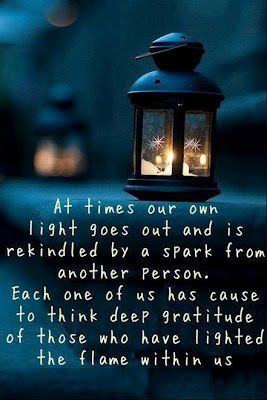 I have never felt I belong anywhere but by myself.  From childhood through college, my community has never been consistent, as I never was able to fit in with any one group.  I became a part of the community that was my focus at the time, almost like a chameleon, but it was never a perfect fit, there was always something a little off, I never truly fit in.  I am not in contact with most of my childhood friends, as my siblings are.  I have few friends, but the few I have are wonderful people whom I cherish very much.  Even with my friends, though, each belongs to a different part of my world, and rarely do all my friends interact within the same community.  I just figured that's how my life was supposed to be - I am one of those people who is independent enough to withstand the life of a loner.

This blog challenge has really opened my eyes to the power of virtual communities.  Just because I don't know everyone in this challenge face-to-face, doesn't mean that we aren't a part of the same community, doesn't mean I don't know you all.  It's just a different kind of community, one, I'm guessing, that 30 years ago, no one thought would be possible.  The internet has opened the world to loaners like me, so that we can finally find a community in which we fit.

My first foray into the virtual community world was because of recovery.  This blog was born through a wonderful online recovery community project.  I have yet to meet any of my virtual friends face to face, but that doesn't make them any less special.  I so appreciate each comment left on my blog, and am honored to leave comments for others.  Reading others thoughts, hearing their stories, it's a treat to get a peek into your worlds, your minds.  I feel a sense of belonging that I have lacked for much of my life. I have grown through this project in a way I never anticipated.  Community, as it turns out, like life, is what you make it.  And everyone reading this blog, everyone that I have met, ultimately helps me grow as a person, and plays a role in shaping my community.  For that, I thank you.

Prompt: To end, I chose the word “community” because that’s what these blogger challenges are about. What does community mean to you? How does it fit into your life? Into your health? Into your recovery? Or how does it relate to blogging? Or family? Share with us what it means for you.

Posted by PurpleDreamer at 10:40 AM 9 comments:

My favorite time of year has got to be Fall... or maybe Spring.... that's a tough one.  I'm going to do what I tell my students never to do - I'm not going to pick just one answer.  I'm just glad I live in a place where we have four distinct seasons, each with their own gifts.

I love fall, or autumn, depending on your word choice.  I love the crispness in the air, how the world smells just a little different, at least where Iive.  You can smell the leaves changing color as much as you enjoy the beauty of them.  The cider mills open, and there is nothing like fresh pressed, unpasteurized, apple cider.  Caramel apples, spiced cider, pumpkin pie... all delicious gifts of fall.  Usually the weather is pretty cooperative, too.  Just right for capris and long sleeves with a comfy vest.  Still warm enough to be out without a jacket, but not so warm that you're sweating your socks off.  There is something special about the crunch of fallen leaves on a peaceful walk in the fall.  It truly is my favorite season to wander the world.

Now, I also enjoy spring.  Spring is the season of renewal, of hope, of new growth.  I love watching the apple blossoms burst through the buds on the branches of the trees in my yard.  I like seeing the flowers peeking out from the earth, stretching their way toward the cloudless blue sky.  Peeling off the layers of winter gear, it feels so nice to be outside without the heaviness of a jacket and hat and scarf.  Fresh fruits fill the fridge to top my breakfast cereal and snack on.  The spring walks lend themselves to pictures of baby animals scurrying about to explore their new world.  The air smells fresh and clean after the chill of winter.  Everything gets to start fresh in the spring.

This is one of those times where I'd definitely not get a passing grade on my paper, since I was asked to choose my favorite time of year.  I'd likely get good marks for creativity and word choice, but for following the directions?  This time I'll just have to accept the low score! 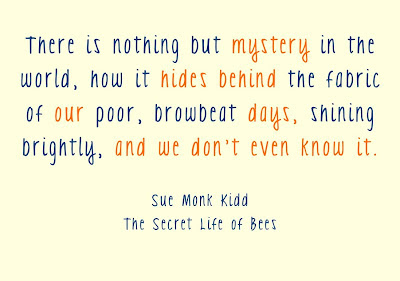 It's likely no surprise that I am not a big fan of mystery.  Anything unknown scares the bejeebers out of me.  When I'm watching a movie, I'll often mute it or change the channel when the suspense gets to be too much for me to handle.  Even if it's an episode of a television show that I've seen many times before, and actually know the outcome, when it gets to *that* part, where the mystery has built and is at the turning point, I'll still change the channel, even though I know what's going to happen!

Interestingly, there is one kind of mystery I don't mind at all... it's the one I'm in control of.  Like when I'm reading aloud to my students and drop my voice, the room grows eerily silent as they hang on every word... and when I stop reading and close the book on a cliff hanger?  It's like being in an athletic stadium when your favorite team scores.  The kids loudly complain and beg for just a few more pages.  That kind of mystery?  I love.  I know what is happening and where things are heading, so I can handle it. 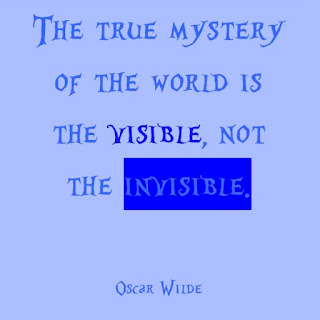 If you've read previous posts on my blog, you know that I am definitely one who prefers structure and planning, and am not good with spontaneous happenings.  I think that's why I have never really enjoyed reading mystery books, either.  I get really, really anxious while I'm reading. I mean, I've read the entire Harry Potter series multiple times, and know how it all ends, yet... if I read any book beyond book 4 before bed, it gives me terrible nightmares.

So, to sum up a rather rambly post, while I appreciate the mystery of life, I prefer a little less mystery in my life.  I wish that things were just a little more transparent sometimes, and a little less scary.... then again, maybe things are quite transparent, and my vision is still rather clouded.  Hmmm.  Guess it really is all about perspective!

Prompt: Does life hold mystery for you?  Do you wish it did? Does mystery scare you? Thrill you? Is it good, bad, or do you feel indifferent towards it?

Posted by PurpleDreamer at 11:30 AM No comments:

When I was younger, travel was rare.  The state in which I live has some great places to take "staycations" but even those were few and far between.  We usually just did day trips.  Once I hit junior high, we were "old enough" to visit my grandparents who spent the winter months in Mexico.  Those trips sound like they would be fantastic, right?  Well, I would say that four-fifths of my immediate family enjoyed the trips (yes, we went for a few visits over the years) and one-fifth didn't.  You may be able to guess which fifth didn't.

As I got older and entered the employment world (which at that age, was babysitting!) I sat for a few families that took me with them to babysit on trips, which led me to Florida and Chicago.  It also opened my eyes to the world outside of my home town.  I loved getting to pretend I was part of their families (even though I was the nanny) and live in a world that was so different from mine, even for just a few weeks.

Once I "grew up" (using that term loosely) I visited a few more states traveling for yoga workshops and retreats.  Again, I was lucky to travel as an employee of the yoga studio, which is the only way I was able to afford such travels.

The biggest moment for me came when I ventured, for the first time EVER, out on my own, and flew to the east coast for a yoga workshop.  It was my first time traveling alone, my first time staying in a dorm, my first time staying with a roommate... a lot of first times in that trip, including the first time I took the risk to assert myself, which resulted in an amazing friendship with someone who I consider one of my closest friends.  That one week workshop led to several summers visiting this friend, spending 3-5 weeks living with her family and helping her with various tasks.  The experience of traveling solo, on such a scary and unknown adventure, led to such a sweet experience...
Honestly though?  I'm really a home-body.  For me, as much as I enjoyed my yoga trips, and love visiting my friend, my favorite method of travel is in my mind.  I love revisiting old friends, heading to Millie's secret hiding place, the banks of Plum Creek, the Moonshadow Campground, Forks, Diagon Alley, the city of Ember, Narnia, Prince Edward Island, and even Assateague Island... books were my favorite method of transportation, and hold many of my most cherished memories.


A journey is best measured in friends, rather than miles.
--Tim Cahill

Prompt: This can refer to an actual trip (or many trips) to other countries. Maybe to other cities. Maybe it’s a figurative journey you’ve taken in your life at some point. Maybe it’s the journey of motherhood or a career traveling. Maybe you have dreams to travel that are driving you to your goals.

Posted by PurpleDreamer at 6:28 AM 2 comments:

I came up with four ways to describe bliss.  One is where I spend most of my time, but the other three, I hope one day become my reality. 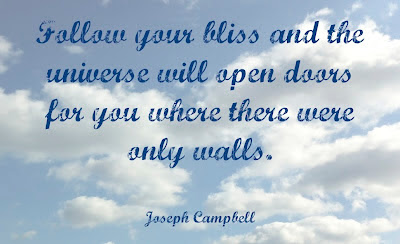 Brilliantly
Living
In
Spite of
Self-doubt

Beginning to
Learn
It's
Safe to
Succeed 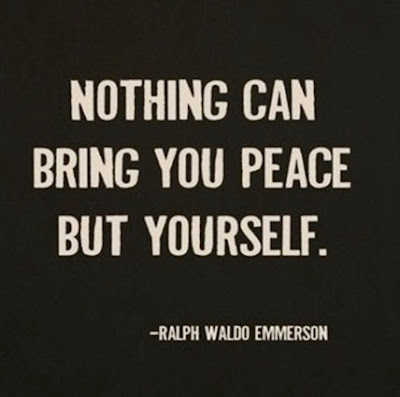 Believe
Life
Is
Significant and
Special